0
was successfully added to your cart.
Nominate someone today 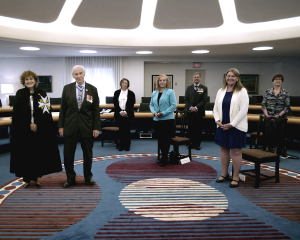 Nominate someone today
Contact us
St. John in the Community
Donate

Lhea Davidson of Edmonton, Alberta
Admitted to the Grade of Member of the Order of St. John

Lhea Davidson joined St John Ambulance over 25 years ago in Yellowknife, Northwest Territories during her final year as a medic with the Coast Guard. Soon after leaving the north she joined St John Ambulance in Slave Lake and later in Edmonton where she joined St John community services as a volunteer while working as a paramedic. As a paramedic Lhea has worked domestically and internationally including oil platforms in the North Sea. With her busy career in the emergency medical field Lhea, in recent years has taken on leadership roles within St John community services including the Edmonton Air Show interacting with other service providers in the overall command structure successfully advancing the goals and mission of St John Ambulance community services and emergency medical practice. Lhea has since moved out of the para-medical field into safety rescue field in refineries, gas plants and offshore rigs. Lhea offers guidance and leadership to other St John volunteers looking toward careers in the medical field. She continues to volunteer for her community with St John Ambulance and is an example to other volunteers in the practice and leadership roles that vitalize the services offered by St John Ambulance to communities in northern Alberta.

Your Honour, for her excellence in volunteering, leadership and as an example to other volunteers, Lhea Davidson is admitted as a Member of the Order of St John.

Dianne Hennig of Devon, Alberta
Promoted to the Grade of Officer of the Order of St. John

Dianne Hennig has provided exemplary service to her community and to St John Ambulance for over 24 years in several capacities as both a volunteer and a nationally certified instructor teaching people valuable and essential life-saving skills – including First Aid and CPR, Oxygen administration, AED among others as well as being qualified in Medical First Responder Advanced Level, Instructor Re-certification, Instructor Development, Youth Leadership, BTS Level 1, Basic Life Support and many more.. Having contributed close to 4,000 hours of voluntary service providing patient care, mentoring and training new volunteers and fulfilling a wide range of Medical First Responder unit administration and leadership duties Dianne’s dedication exemplifies the mission and key values of St John – Charitable service and professionalism. Dianne continues to be an active St John Ambassador and Patient Care volunteer in addition to being an active St John National Certified Instructor.

Your Honour for her outstanding contribution to her community and to the St John Ambulance organization Dianne Hennig is promoted to the Grade of Officer of the Order of St John.

Kim Laing of Monarch, Alberta
Promoted to the Grade of Commander of the Order of St. John

Kim Laing has been associated with St John Ambulance Alberta for close to 30 years beginning as an instructor and then on staff in 1993. Kim has held several management positions with the organization beginning as the Area General Manager for Lethbridge and then as Director of Regional Development for Southern Alberta. Kim is currently the Vice-President of Business Development and Public Relations for the Alberta Council, as well as a volunteer in patient care community services and holds several certifications as an Instructor, Instructor-Trainer, Child Restraint Systems Instructor, AED and Advanced Medical First Responder. In addition to her work with St John Ambulance Kim is a volunteer with several organizations such as: The International Red Cross and Red Crescent, Alberta College of Paramedics, Hockey Alberta, Hockey Canada, Hand to Heart Foundation, and on and on. Kim has represented St John Ambulance in many worldwide disasters and emergencies such as the Hurricane Katrina, Kenya IDP Camps,

Afghanistan, the Haiti Earthquake, Calgary Floods, Slave Lake Fires, Rwanda and Cambodia, and many many more over the years.

As the Vice-President of Business Development and Public Relations Kim has raised, in her career with St John Ambulance Alberta, over $2 million in capital campaigns, donations and grants. In addition to her work with St John in Alberta Kim has led several groups at the national level and established herself as an executive leader throughout St John Ambulance Canada.

Your Honour for her outstanding contribution to her community and to the St John Ambulance organization Kim Laing is promoted to the Grade of Commander of the Order of St John.

David Hook of St. Albert, Alberta
Promoted to the Grade of Knight of the Order of St. John

Your Honour, David began his association with St John Ambulance in Winnipeg in 1975 as a volunteer instructor and was appointed to the staff in 1983. David was appointed the Executive Director & CEO of the Northwest Territories Council from 1989 to 1991; was acting CEO of Saskatchewan Council on 2 occasions; and has worked in all St John operations in western Canada and the Canadian North, including the Yukon and Nunavut Territories when they were a Branch of the Alberta Council and the NWT respectively. David has also represented St John Alberta in the United Kingdom and Hong Kong at special ceremonies of the Order of St John. Mr Hook is currently the President and Chief Executive Officer of St John Ambulance Alberta Council and has been since 1992. He is an Executive member for 30 years of the Canadian College of Health Service Executives; and for over 10 years has been a member of both the American College of Healthcare Executives (where he’s been the Canadian representative on the Governance Committee) and the Institute of Public Administration of Canada. David has chaired many committees and task forces for St John Ambulance Priory of Canada over the years and three times chaired the National Management Team of CEOs across Canada. For close to 30 years under David’s leadership St John Ambulance Alberta has grown substantially, has improved the image and brand of the organization and continues to ensure the organization evolves its business and charitable practices to reflect the needs of business, industry, government and the

community. David is also the founding member of the Joint First Aid Standards Board for OHS Alberta, a founding member of the Injury Control Alliance of the University of Alberta and has sat on numerous health, safety, hospital and non-profit Boards throughout his 45 year association with St John Ambulance in Canada.

throughout Canada for the past 45 years, David Hook is promoted to the high grade of

Knight of Grace of the Order of St John.

Lynn Cook of Edmonton, Alberta
Promoted to the Grade of Dame of the Order of St. John

Mrs. Lynn Cook has been associated with St John Ambulance for over 22 years beginning in the Northwest Territories in the late 1990s where she served on the Finance Committee and later as Chair of the Council. For the past 12 years Lynn has been an active member of the Board of Directors for St John Ambulance Alberta and currently serves as the Council’s Chair of the Human Resources Committee. As Chair of this committee she has been instrumental in developing the emergency CEO succession plan and policies, Respect in the Organization, and conducting dispute resolution hearings for volunteers and staff. Lynn has also developed Board member diversification over the years provided Human Resource advice to the Board of Directors for recruitment of new members. Lynn also provides orientation planning and presentations and board evaluations for measuring board effectiveness.

Your Honour Lynn Cook is a professional Human Resources executive and has held several senior executive positions in the University of Alberta Hospital, including the Vice-President of Operations and Director of Medical and Ambulatory Services. Lynn was also the Executive Director of Human Resources of the Government of Alberta and a senior partnership advisor to Alberta Labour. Lynn is a past member of the Conference Board of Canada, The Canadian College of Health Service Executives, University Hospital Foundation Board, was named Big Sister of the Year and was Corporate Chair of the Stanton Yellowknife Hospital Foundation.

Grace of the Order of St John

St. John Ambulance is an international humanitarian Organization and is a foundation of the Order of St. John. 88725 4035 RR0001
Privacy Policy